some books have a transformative power quite similar to magic. obviously we had talked about Harry Potter and now let’s talk about  Own Your Own Shadow – Understanding the Dark Side of the Psyche I bet Jk Rowling’s read it!). To describe the author Robert A. Johnson, he is a Jungian psychoanalyst, who works a lot on archetypes. I had read his book “He” about male archetypal psychology (based on the myth of Perceval) (so awesome) and “She“, his matching pair (on the archetype of Psyche) (more complex) (we wonder why)

as usual I won’t give you a journalistic review of this book which despite the fact its shortness (130 pages) presents a ton of aspects. I’ve noted only 3.

1- birth of the shadow

there is no specific definition of shadow but several in fact. the first is that we live in societies and cultures, civilizations that collectively make us reach a level of sophistication or beauty that cannot be questioned. however, function in society requires agreement on common rules, sometimes arbitrary but which have the merit of making us live together, even millions, anonymous and in relative peace. the price to be paid is to deny a part of the individual, who to fit right in will build a compatible personality, as virtuous as possible, to excel in high society, or just to be part of it. However human being is more complete, complex. So he will have to deny a whole part of himself, his shadow.

the second definition comes from a priest I think, friend of Robert A. Johnson. the shadow is at the same time the part that we more or less consciously sweep under the rug, and the all part completely unknown by our conscience. he says that as dangerous it could be, the shadow (anti-virtuous) is his favorite part of a person because it would be the authentic.

whatever the definition, the shadow quite often blow up in your face in your 40s. the famous midlife crisis when the world we’ve built collapses. why does it fall? because it was built outside the shadow and that suddenly the shadow claims his share. the denials and untruths in your personality, construction will be undermined. how many divorces? how many “odious” parents? how many adulterers? how many resignations? burn out ?!

Johnson’s theory is that all the energy we put into our “clear” part is as much which grow up unconsciously in the shadow. and give the example of his friends who stayed with him 15 days instead of 3. johnson remains courteous, hospitable, sympathetic. When his friends left, he went out and before he even understood, scream at the local cashier. how to avoid this? : to honor our shadow, to recognize it and to perform a psycho-magic act to honor it: shouting insults (to a wall, not at the cashier), hitting a cushion, writing a disgusting poem …

we already knew it, to know its shadow makes us less dangerous. we had talked about it in spinoza, et jerry dans son Play From Your Fucking Heart.but here we go further with the how to manage the shadow beyond its exploration. well:

piting I didn’t think I will write this one day but it’s my favorite part of the book.

religion comes from the word re-link. religion, in its first sense, doesn’t mean to adhere to a dogma but to link us. to take all the parts in us to become “one”, and sacred. in English “holy” would mean “to make whole”.

this explains the sacrifices, the fasts, the obedience and sometimes the violence present in a lot of religions. to allow us to be whole. This is also the reason for our fascination with morbid, disgusting news, the cruelty of Games of Throne … it’s all our shadow that is projected outside of us. we would talk about projection afterwards.

“it is by going down into the abyss that we recover the treasures of life” said Joseph Campbell (he probably had also read Johnson!)

because obviously if the first promise of the exploration of the shadow is to make us less dangerous for others and less alienated from our own being (the famous “I don’t know what happened, that don’t sound like me” “- but it’s you yet”), there is a second one: to discover our inner genius. (once again pirate and watch THE WORK)

Johnson admits that it’s easy for his patients to come out the skeletons of the closet. they do it fast enough. on the other hand, to recognize their genius, gift, what makes them so unique, brilliant, is a part they absolutely don’t want to recognize, what do you think of this? It talks to me so much!

So of course anyone who ignores his shadow will project it on the world around him (see above) but especially on others. sometimes in a extremely toxic manner. listen carefully people around you talking about others and you’ll know everything about them. this can be done in the inter-generational: your child will highlight the shadow that you cannot recognize: ah yes you’re a perfect mother, well I’ll show you the limit of your desire to control and be. .. uncontrollable! (wow piting). johnson also recounts this incredible example of a father for whom everything seems to be fine but who isn’t able to dream. it is his son who will have nightmares for him! until he invests his shadow and starts dreaming again. leaving his son with his own dreams. what a power! parents, watch out, and please own your shadow !!!!!!

of course the collective projection can be very dangerous when it is recovered by extremist movements. but even worse, unrecognized projection can come to incarnation into a tangible reality! thus Deepak Chopra wrote this incredible article about Trump at the time of his election: he is the embodiment of our part of shadow, the one we collectively drag around and which by dint of being unrecognized finally become a reality.

the transmission comes sometimes from a situation that will make you touch God: romantic passion play.

why do we love so much at the beginning of a relationship, why we “fall in love”, because as we don’t know yet the other (who often doesn’t know him, herself) we love our inner genius projected on him, her. this perfectly forbidden love (we don’t have the right to love so much), is so powerful … isn’it? !!! we see it clearly in “her” : how can we fall in love with a robot, which welcomes this projection of our god / goddess within.
it’s because we find ourselves “whole / sacred” through to the other.

obviously to love is a whole other thing. and sometimes when you’ve been touched by divine love it’s pretty hard to bring back down a terrestrial love: that of the other. not as a projection but as him, herself.

there is a fabulous explanation of the forms of the circle (mandala) which brings us together in our different cycles of life, the almond (mandorla), the common part of our two circles clarity / shadow, human / divine. the more we progress in our way, the more the circles will get closer, to be superimposed, the duality will become “one”. the reconciliation promised by the quest of the shadow, brings back our truth, our magic from the depths of existence.

and complete the book, on these beautiful words:

the mandorla isn’t a place for neutrality or compromise, It’s a place where parrots and rainbows are born.

sorry for the spoiler (anyway read it all), the books ends with these beautiful words! 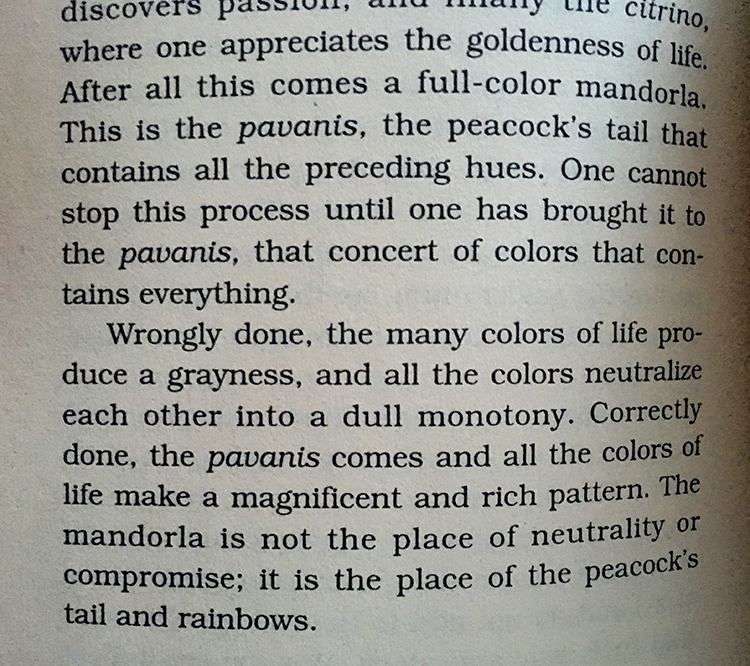 i can’t avides you enough to read this gems. with love!