So, shall we go back to the valley? Because, you’ve had so many questions, notably “nah but how is this actually works?” Therefore, I am going to tell you the factual operation of the camp but also it’s philosophy. 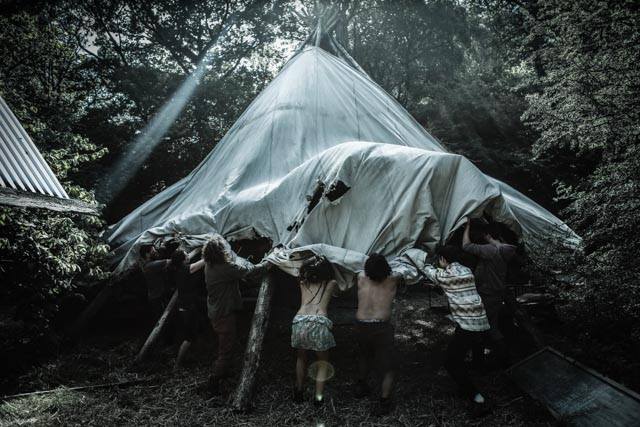 They told me there didn’t have authorization for it, but I think that it’s  actually a great thing, because those who live at the camp  “come to it” .  They are happy to go there, to return to it, to be part of it and to find it again.  This has the immense merit of not falling into routine or that you sleep upon a place that demands vitality, or of course that you find yourself trapped by a place that is not fitting you or that you outgrew (I think about teenagers).

The camp is very limited, we were 40 when we arrived, and maybe 150 during the festival “Caldron For All” 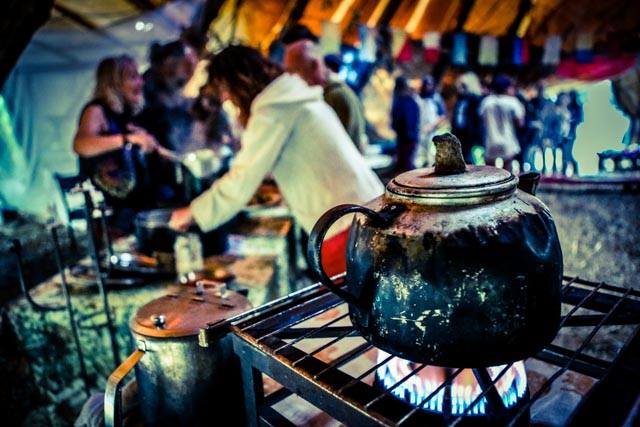 The camp is not expensive, and most people feed themselves at the “kitchen”.  It’s a time when when everyone gathers together.  Depending on the crowd, it will be held in a small tipi near the kitchen or in a larger tipi with picnic tables, a central open fire and hay on the ground.  You can also stay outside to eat.  Or bring your own food (first village is 50 minutes away)(by car).

At the end each wash their own dishes.

There is always a vegetarian option.  But nothing is home grown.  There is no farming at Spirit Horse and no hunting either.  So it’s wild, but on other aspects than food.

So this is it, these are the two only rules at the camp.  For the rest, the main rule is that there is none. 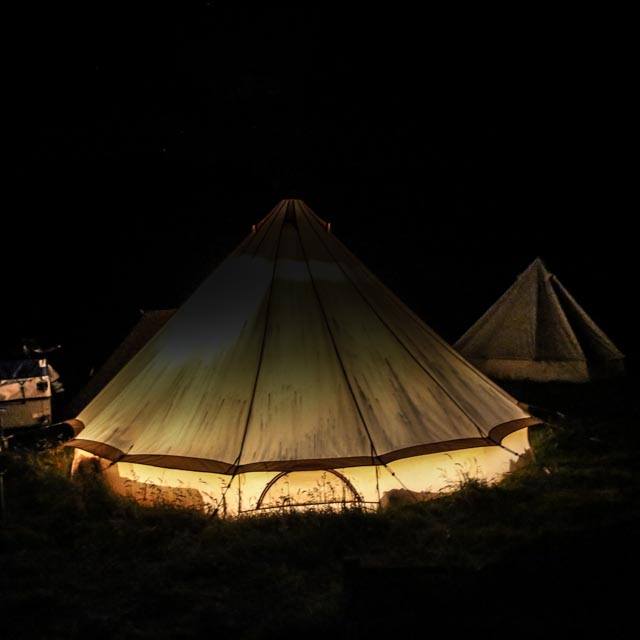 This is something that enormously touched me. There are babies, kids, preteens, teenagers, young adults, thirty something, forties etc., all the way to seventy-years old or so.  It touched me because I met incredibly closed knit families.  With a great sense of transmission. I mean immaterial one (which touches me as the daughter of immigrants, but also exiled immigrants). Some had made the choice to live partially with nature on different hills depending on the seasons and the jobs opportunities etc.  Without running water or electricity… all year round.  As I was telling you some families practice home schooling.  What I liked about it is that many of them had and shared an authentic family vision.  Of their family.  and I realized that it was rather rare around me: we love each other, we have kids, but do we have such detailed desires as that…?  Hum, I didn’t realize it and there it became so striking. 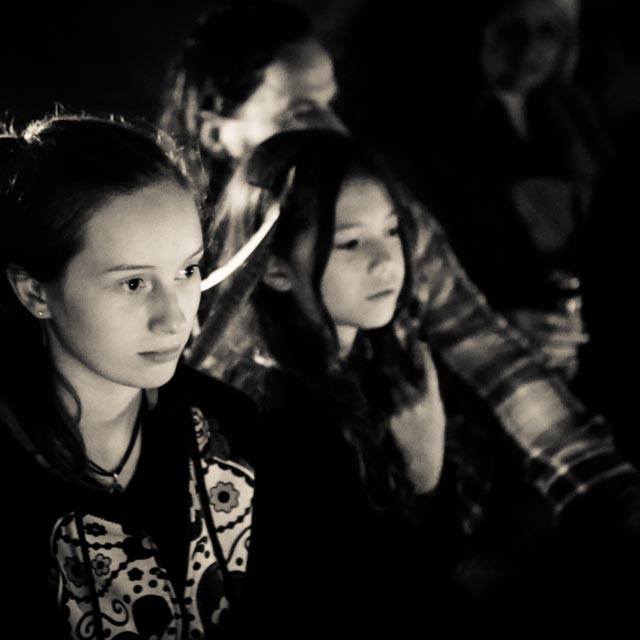 The act of going to a community every year voluntarily takes some education away from the parents, the community ends up educating the kids.  For example, Tâm was telling you about mutual aid, Leo about climbing the tree.  It all creates some sort of education, that pushes the child autonomy and self confidence.  And I must admit that I was blown away by the kids over there (not mine, the others).  They are overly energetic and at the same time so calm, poised, anchored.  Babies are being passed from arms to arms… of kids, brothers and sisters.  It was all very beautiful.

And then what also really touched me was the teenagers.  Those teens who came with their parents and who are now coming with friends. Teenagers who love, love each other, who play and learn… truly it’s very very beautiful. 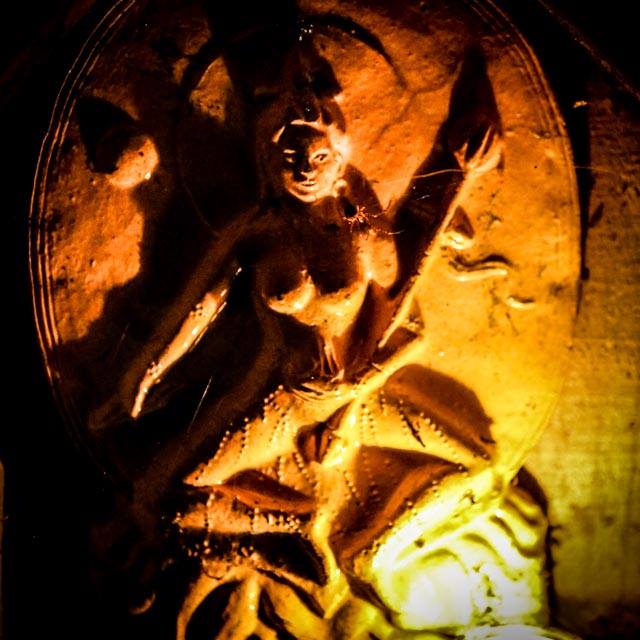 This place highly believes in the difference and the male-female complementarity.  Whether you like man or woman it doesn’t matter, each woman is invited to celebrate herself as is, each man is invited to celebrate himself as he is (once again I insist on, whatever his/her sexual preference). And by the way I ask to those of you who wrote me and maybe continue to read me, not to label them as backward, to be respectful and curious of the other who doesn’t think like you.  To be progressive is to mostly listen.

So there is a women’s lodge and a men’s lodge where people from the opposite sex can only come in if invited.  None laughs at the sight of a giant phallus at the entrance of the men’s lodge, nobody laughs at the sight of feathers and garland at the entrance of the women’s lodge (and nobody forces them to set a giant vagina to do “like” the men, none of the women there feel the desire or the need).  Thus it doesn’t mean that men aren’t taking care of the kids and that women are tending to dishes, it’s to the contrary highly progressive in the domestic duties.  Everyone is doing what they want and help however they want, therefore you can’t really tell the difference.  I was also telling you about topless women and/or pirate drinking coffee etc., standards aren’t built upon the same codes; I have mostly perceived a lot of respect and harmony between men and women. (and trust me it’s very relaxing) 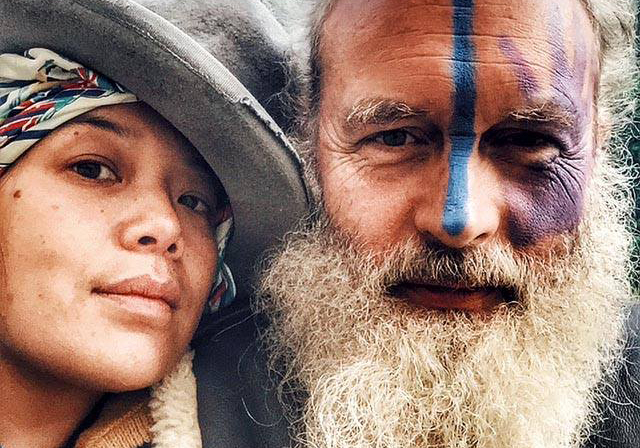 Many people there are practicing an art of some sort.  You don’t ask the question on whether “you can make a living of it?”.  The question is not there, you are the artist of your own life, period.  Notably there is Joe, one of the greatest percussionist of the UK, and his wife Alex who teaches dance class “5 rhythms” (a crazy experience). There are apprentice singers, apprentice guitar players.  There are story-tellers.  There is Anthony and Paloma the crazy singers.  So I am not sure, but I think that art is seen as a connector to our “wild self”.  Something along those lines.  It’s not Damien Hirst.  I experienced an open stage, the Ceiligh, where one could share whatever he wished: an opera song, a blues guitar play, an exotic dance, a sketch, a few verses.  So beautiful.  So much talent.  And I am not even one of those who saw the kids grow up to become the artists of today, it was very moving.

Many questions about it!  Once again all is allowed.  Notably alcohol and cigarettes… Hahaha.  Well we never talked about this on the blog, I am someone with an addictive personality… about work and social media (re-hahaha)(but don’t worry I can quit tomorrow!), but about drugs, not really: I am allergic to alcohol and smoke a cigarette very once in a while.  As for the unlawful ones, I’ve had 3 experiences in my life, with my brothers each time and the most famous one was blogged live here ici in my daughter hello kitty cake mold.  So not too bad.  It’s not my kick. 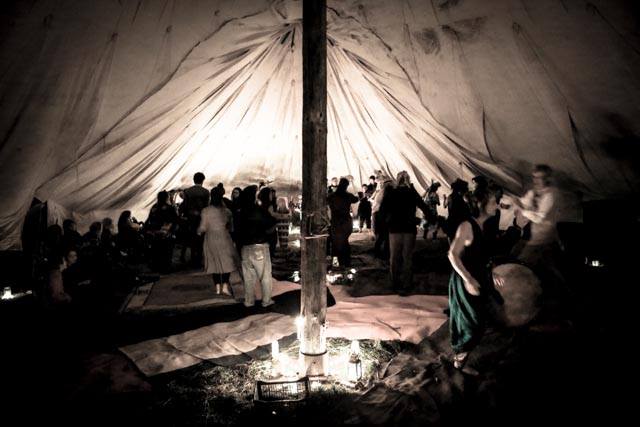 Finally, they say there aren’t any rules, but it’s partially untrue.  There are no rules because beyond folks troubling looks (frilled shirts borrowed from old pagan tradition, the dreadlocks from Indian sadhu, the worn pirate hats and Vikings hatch), the people of Spirit Horse are extremely evolved.  It’s via very simple things which are at the same time very complex for those who live in our system, within their wheels as Mem said.

For example, nobody is blaming the rain as injustice, if you see what I mean.  even when it looks like this :

This is also why there is no addiction (what for?).  There is no envious people, you won’t find people complaining.  Over there, everyone has gone past those personal development stages.  So you can move to something else: celebrate, share, learn, thanks. They are generous, they are curious.

It actually surprised me to see so many courageous men during the singing classes or Brazilian dance (yes I realize how much more sexist thinking I still have).  In any case it’s beautiful to see people that go like “ok I am going to sing for the valley” “yes why not dance for the cascade” “oh I felt that, what about you?” ” oh yes tonight I am using glitter and branches from a tree to craft a necklace”, or even “ thank you I forgot how great it feels to be here” (a woman talking about her own body at the end of a dance class).  It’s… fabulous.  It’s really wonderful.

Whether back in town or anywhere else now, this for sure I brought it all back in my heart.  and forever.

So there you go, you know all about Spirit Horse.  this said I will return with a fourth post… a video I hope because Shivam, the founder of the camp asked me to film him…

I hope that all this inspires you.  thousand thousand kisses et beauty to you all! 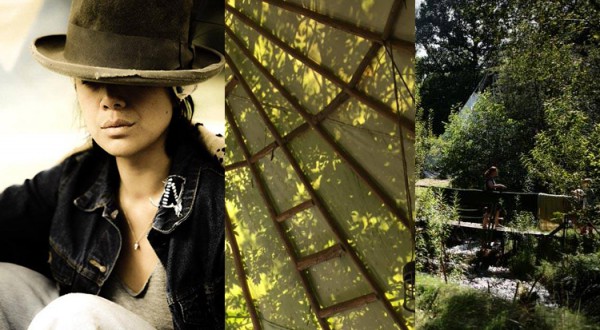 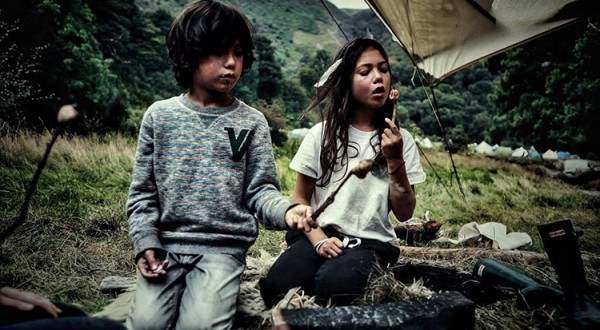 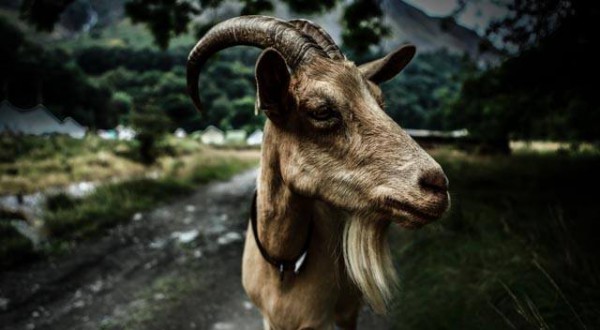